Throughout history, man has had a fascination with the sea. We see this evidenced with the ancient Egyptians whose early boats were built out of papyrus reeds and were propelled by rowers using oars. In the Egypt museum in Cairo, there are artifacts such as the one pictured below estimated to be from around 6000 BCE.

The solar boats of ancient Egyptians were large ships made of cedar wood. They were used in religious rituals during Pharaonic times. The boats have twelve paddles, five of them were used for rowing from each side with four of these five paddles made in the shape of a bayonet that was used by the unseen sailors to protect the boat in its journey to the other world according to ancient Egyptian mythology. This is beside two paddles that were used to correct the path of the boat the same way the rudder functions. 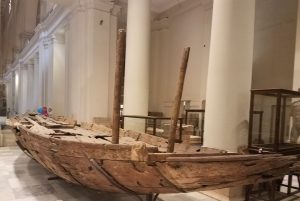 It is estimated there are 3 million ships lying at the bottom of the ocean around the world. Most people are unaware of the names of these ships and what happened during their voyage. Many have stories that are ghastly, whereas others have stories that have played out on the silver screen. In the movies, these stories are often romanticized providing images of being stranded on a desert island. This is true in the popular show Gilligan’s Island, where during a three-hour tour the S.S. Minnow is shipwrecked on a tropical island. Everyone onboard (the captain, Gilligan, the Howell’s, the movie star, the professor, and MaryAnn) survived the shipwreck and despite their situation they survived on a diet of fish and coconut cream pie. And, although the professor was always to get them off the island, he never managed to get all the castaways to safety

There are several shipwrecks accessible to the public such as the Peter Iredale. Located in the Pacific Northwest, the Peter Iredale ran aground in 1906. According to the Oregon Historical Society, the Peter Iredale was a four-masted steel bark built in Maryport, England. The quick response from the lifesaving station at Point Adams contributed to the survival of twenty-seven crewman. Over the years the vessel has deteriorated due to the waves, wind, and sand. Today, the remnants of the ship look quite different than that of 1906.

My husband and I had the opportunity visit both Egypt and Fort Stevens State Park in Warrenton, Oregon to see both ships. The world’s fascination with the sea may be due to two-thirds of the earth surface is covered by water. The sea’s power to fascinate us is ageless and according to Greek mythology Siren is a creature half bird and half woman who lured sailors to destruction by the sweetness of her song.

Nevertheless, travelling by sea is amazing……