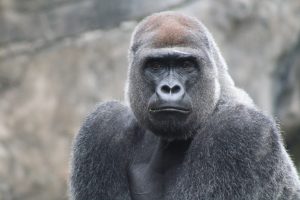 The Republic of Rwanda is a beautiful country on the great East African plateau with the divide between the Nile and Congo rivers passing in a north-south direction through the western part of the country. Rwanda is slightly smaller than the state of Maryland and is land-locked by bordering Burundi, Democratic Republic of the Congo, Tanzania, and Uganda. The landscape has a hilly mountainous terrain, which is home to some of the most beautiful flora and fauna. Volcanoes National Park is home to one-third of the mountain gorilla worldwide. A full-grown silverback gorilla is up to three times the size of the average man and is remarkably peaceful and tolerant to humans, however, those who challenge an alpha male may be frightened by his impressive shows of physical power. He may stand upright, throw things, make charges and pound on his chest barking out hoots or unleashing a roar. 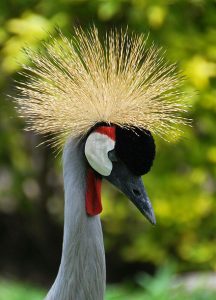 The grey crowned crane is another beautiful endangered animal and stands 3.3 ft tall, weigh 7.7 lbs, and have a wingspan of 6.5 ft. They have long legs for wading in the grasses where they eat plants, seeds, millet, insects, frogs, worms, snakes, small fish and eggs of aquatic animals. Wetland loss and degradation, human disturbance, live capture and egg collection for commercial trade, unintentional or intentional poisoning, power line collisions and land development have contributed to their decrease in numbers.

The four official languages of the Republic of Rwanda are Kinyarwanda, Swahili, English, and French spoken by the Hutu, Tutsi, and Twa who make up a population of 12,187,400 people. The people of Rwanda have experienced great loss from the Rwandan genocide, also known as the genocide against the Tutsi, which resulted in a mass slaughter of Tutsi in Rwanda. It was directed by members of the Hutu majority government during the 100-day period from 7 April to mid-July 1994 it is estimated up to 1 million people were killed during this time. You may visit the Kigali Genocide Memorial website (https://www.kgm.rw/) to learn more and to contribute to the memorial.

Today, both the Hutu and Tutsi have come together for the sake of Rwanda to live in peace, but to never forget the heinous acts that occurred 25 years ago. The Republic of Rwanda is a beautiful extremely clean country due to President Paul Kagame enacting strict laws, some of which reduce pollution and increase the cleanliness of the country. Kigali is one of the cleanest cities in Africa due to monthly mandatory community cleanup called Umuganda. Participation is not an option, as you may be fined.

Rwanda in 2008 enacted an aggressive plastic bag ban and is one of 40 nations around the world who have restricted, banned, or taxed the use of plastic bags. Violators may face heavy fines or even jailed with fines estimated at $61 (US). Since the ban Rwanda has seen a reduction in animal deaths, soil erosion, flooding, and malaria. Investments by Rwanda’s Green Fund to turn Nyandungu wetland into an urban recreation and ecotourism park are examples of the city’s continued commitment to environmental initiatives. Rwanda plans to fully transform into a sustainable nation by 2020.

Here are a few ways you can help protect and conserve the endangered Mountain gorillas and the Grey crowned crane. Visit the Dian Fossey Gorilla Fund (https://gorillafund.org/how-to-help-save-gorillas-and-other-wildlife/) to donate to these beautiful animals or when you track gorillas you are also contributing to conservation as part of the money for the permit is used to do conservation work (https://www.volcanoesparkrwanda.org/information/save-mountain-gorillas/). To help protect the Grey crowned crane visit (https://www.savingcranes.org/species-field-guide/grey-crowned-crane/) and either adopt a crane, fight the African crane trade, or become a member of the International Crane Foundation. There are many other conservation groups as wee, just ensure to donate to a reputable one.

Go and visit Rwanda to get a first-hand view of the genocide that took place in 1994. In addition, tour the rest of the beautiful country to speak with the local people and see the beautiful flora and fauna. Visit Ketour Travel’s website (https://ketourtravel.com) read the blogs and updates on current and future trips. Go to https://discover.ketourtravel.com/ to purchase airfare, hotel, transfers, activities and holiday packages. Do not forget to subscribe to the newsletter, follow Ketour on our YouTube channel, Facebook page, Twitter, Pinterest, and Instagram