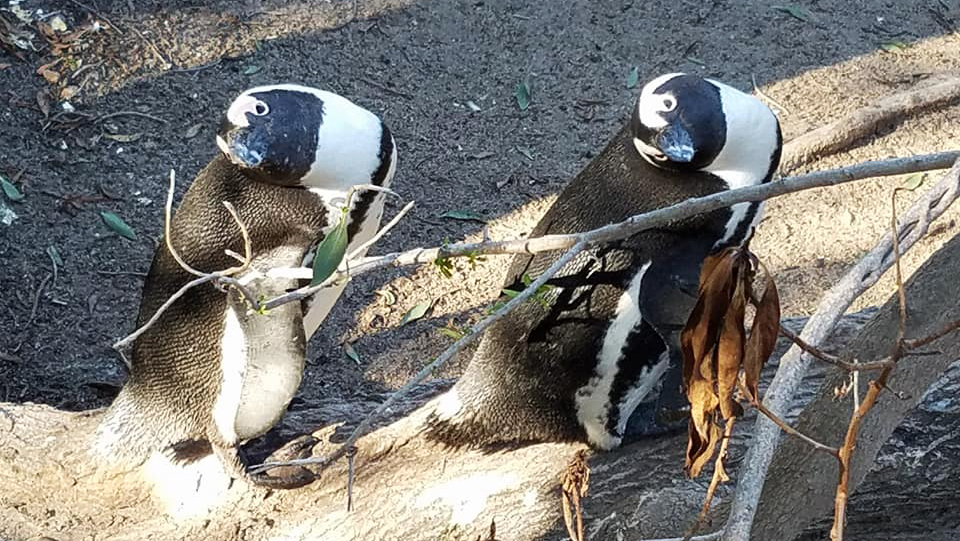 Have you ever been out somewhere and have gotten a strange look?

This happened to me at Boulder Beach (near Simon’s Town) in Cape Town, South Africa. My husband and I encountered a colony of jackass penguins (species of penguins) who were on the beach walking, sitting on their eggs, in their burrows, tending to their young or swimming in the Atlantic Ocean. There are many different species of penguins and can be found in: Antarctica, The Galapagos Islands, New Zealand, South Africa, Argentina, Australia, Chile, Falkland Islands, Gough Islands, and South Sandwich Islands.

South Africa is not limited to awe inspiring animals and beautiful landscape, but there are beautiful people with rich history who live in the southernmost country on the continent of Africa. For instance, Happy is a young Zulu man we met who shared with us stories of South Africa while growing up and he provided insight into his family life. While travelling in South Africa we had great conversations and learned about the pre-colonial and colonial history in South Africa. You can learn more about the history of South Africa by visiting the District 6 museum, Bo-Kaap museum, Robben Island where many of the ex-political prisoners currently perform the prison tours, just to name a few.

South Africa has a great food scene, my husband and I ate at Mama Africa where we shared Lamb curry with pup and Mama’s Bobotie (South African meat pie) with rice. We also managed to eat some fresh seafood, biltong, and other South African dishes.

Did You Know: Interesting facts about South Africa

This was a small snapshot of a country (3x size of the state of Texas) with such rich culture, history, food, wildlife, etc. Coined the rainbow nation by Archbishop Desmond Tutu, the people of South Africa are very warm and friendly. I would encourage anyone to visit this beautiful country to obtain your own view of Mzansi (Xhosa nickname for South Africa that literally means “South”). Sign-up or give the gift of membership of Ketour Travel Club today at www.ketourtravel.com to experience the richness of the continent of Africa and the Middle East.

If you are interested in helping conserve the coastal seabird populations visit the SANCCOB link to learn how to help. The Southern African Foundation for the Conservation of Coastal Birds (SANCCOB) is a registered non-profit organization (NPO 003-134) whose primary objective is to reverse the decline of seabird populations through the rescue, rehabilitation and release of ill, injured, abandoned and oiled seabirds. They are also registered with the American Fund for Charities.