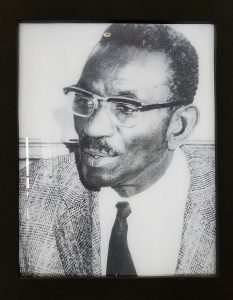 It was the first President of Senegal, Leopold Sedar Senghor who first had the vision of a museum celebrating African culture. Senghor was born on October 9, 1906 in Joal, Senegal. He studied at the Lycée Louis-le-Grand and at the Sorbonne in Paris where he discovered African art’s impact on modern day painting, sculpture, and music. In 1939 Senghor was drafted into World War II, subsequently captured and spent two years in Nazi concentration camps. In 1960 he was elected President as a part of the African socialist party, which was democratic, humanistic, and shunned slogans such as “dictatorship of the proletariat.” He was a poet, teacher, and major proponent of the concept of Negritude. In 1980 Senghor stepped down as President of Senegal and led the foundation for a concept that would one day come to fruition.

Opening in the latter part of 2018, the current collections focuses on the following eleven themes: 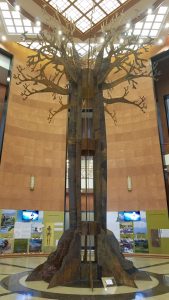 When you walk in the first thing you see is L’arbre de l’humanite (The Tree of Humanity) by Edouard Duval Carrie from Haiti. The tree of humanity is a replica of the baobab tree, which is known in Africa as the tree of life and positivity. The replica stands 35 feet tall, the base is 14.76 feet, and it weighs 15,608 pounds. The baobab tree is important for humans and animals in the arid regions of Africa. Many animals feed on its leaves, flowers, and fruit. People can make food, clothing, medicines, and other useful products from it.  Most baobabs live for over 1000 years, life may be short-lived due to elephants, however, there is record of a baobab in South Africa dated around 6000 years old.

As you walk through the museum it starts with the beginning with the discovery of many skeletal remains and include Toumai and Lucy. Moving on from man, you will see how tools progressed over time. The next section focuses on architecture, mathematics, and medicine. Included in this exhibit are notable men and women from Africa and the diaspora. On the second floor you will see the different textiles, masks, paintings, and different contemporary art reflecting Africa and the diaspora today. The third floor has an exhibit showcasing the importance of cotton and has a stage for concerts, etc.

Take the time to discover the Museum of Black Civilizations for yourself. Read more about the exhibits and museum by visiting www.mcn.sn. The museum represents the histories and contemporary cultures of Africa and its diaspora. In an effort to decolonize the perception of Africa from being dark, savage, and devoid of civilization.